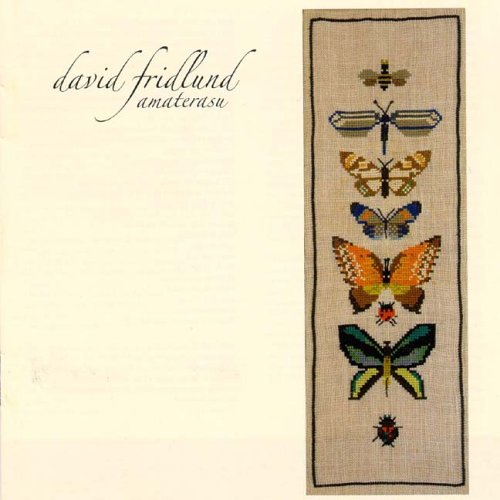 Amaterasu is the debut album from David Fridlund, namesake and frontman for revered Swedish guitar-and-piano pop powerhouse David amp; The Citizens, and one of the most prolific and respected songwriters in Scandinavia.

Neatly positioned between quiet sections of cool piano, even at the most stripped and feathered moments on "Amaterasu", a vying monster of bombastic qualities awaits, making it difficult not to be moved.

With a lorry load of accolades and praise for his work fronting David amp; the Citizens, Fridlund displays yet more talent on his first solo disc.

"I never planned a solo record, everything I wanted we already did with the Citizens." David says, "But the more people mentioned the solo idea, the more it grew, so when our Swedish booker Jesper Kumberg asked: 'isn't it time for that solo record' it all sort of fell into place." Kumberg has worked with David since early 1999, helping his band to over 200 shows and taken some praise for propelling David and the Citizens to dizzy heights and a Grammy nomination. "But we had run Citizens aground," Says David, "Admittedly, We were close to splitting, and probably would have if the work on this record had not got going."

It didnt take long, Fridlund rarely suffers writers block. Anyone who knows him will know he is always a man with a new song. He is a record company's dream, and a fan's songwriter. The Citizens' status quo is removed, and replaced with a new order called "Amaterasu".

"On Amaterasu, the piano compositions and the lion's share of songs were recorded at home (like many of the early Citizens' demo records), and also at our rehearsal space - like the song Sore Feet and Blisters, which was on Until the Sadness Is Gone - with my brother Joel adding his expertise."

Joel has long been in the background. As kids living in a terraced Swedish radhus, they played at making a recording studio.

"With this record, it's been a refreshing change and the recording process, to say the least, has been Lo-Fi."

Indeed, "Amaterasu" was partly recorded at an ex-slaughter house, backed by musicians, and co-produced and performed by David and brother, Joel. Finally at Senorita Studios, Hassleholm, It is Johan T Karlsson who tweaks knobs and took the reigns for the final mix.

If there is a place where something is minimal and experimental - it is where "Amaterasu" resides.

Highly regarded singer and David's long-standing partner, Sara Culler also guests on the album. David says, "The end result is named: "Amaterasu", and is dedicated to Sara and is inspired by her middle name. This is what it all means to me. What it means to you, you will have to explore alone."

In Japan, "Amaterasu" is the name of the sun goddess.

Amaterasu is all yours.

Hodgson: A Cruel Way To Lose

The reaction from Brett Hodgson as Hull lost to Leeds ...

All members can pick up a additional ticket for free for our clash against Wigan. ...

The team news is in for this evening’s Dacia Magic Weekend clash against Leeds Rhinos… ...

The Academy squad to take on Castleford this weekend ...

Read the preview ahead of Hull’s Magic meeting with Leeds ...

Voting Open For Supporters Player of the Year

Voting is now open for the KayGee Engineering Supporters Player of the Year, in associaition with FC...

A final handful of places remain with the Hull FC College for the 2021/22 academic year. ...

Brett Hodgson gives his verdict after the Castleford tie

Cameron Scott's thoughts after defeat to the Tigers

Watch the Hull Derby back in full